Everyone knows about SXSW and ACL. You probably also know about the bats under the Ann Richards bridge. But you may not have heard about the wildest, most exciting summer spectacle in Austin: The yearly gathering of purple martins before they migrate down to Brazil. Just before sunset every night, from mid-July to mid-August, half a million of these acrobatic birds will swoop and swarm around trees of their choice, looking at times like a veritable birdnado, or a river of birds in the sky.

And inevitably, they choose to roost in the middle of a mall parking lot. 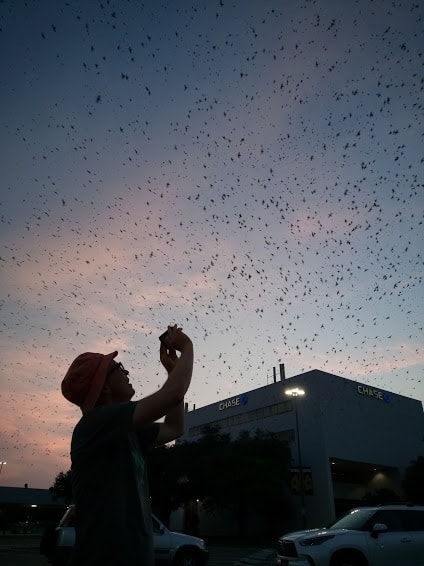 They move around, season to season, usually choosing a different set of trees in a mall parking lot, according to whatever crowdsourced problem solving 400,000 birds can muster. When ACC took over the Highland Mall and began pulling up the parking lot, the purple martins jumped the highway to roost at Capital Plaza. Then for a couple of years they swarmed above Round Rock, which was quite the bummer. But in 2021, in a sign that the world is coming back to normal, the purple martins have returned to Austin.

If you want to see the purple martins on any old summer, you will need to peruse social media for clues to their current whereabouts. The Travis County Audubon Society holds weekend “Purple Martin Parties,” and in general they pretend like they own all the birds. So you can’t count on them to release the location of the birds in a timely manner. If you have some technical acumen and you want to get a jump on the Audubon crowd, you can use publicly available Nexrad radar data to spot the expanding ring of waking birds flying into the morning sky. 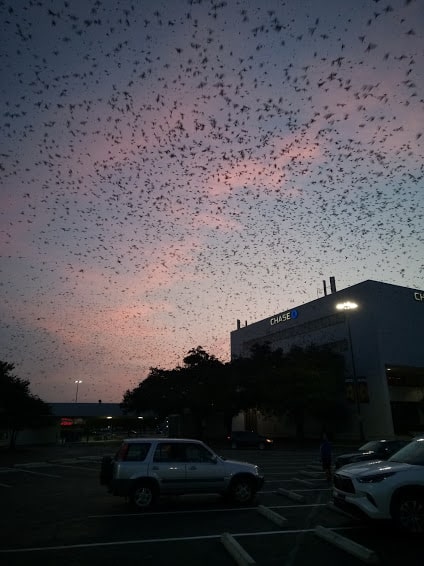 Once you find the spot, I recommend getting there at 8:00pm. There won’t be any purple martins present yet, but this allows you to experience the slow and imperceptible transition between an empty sky to a sky seething with birds. Avail yourself of the mall-food you will find in the area, including a cold beverage. Setup folding chairs in the spot next to your car, and wait for the spectacle to begin. A large hat or an umbrella will save you from at least some of the bird droppings, and remember, no matter how much awe you may feel, under no circumstances look up with your mouth open.