Soup So Good, I Had to Sit to Rest: Bun Bo Hue from Lily’s Sandwich

About Lily’s Sandwich (Or Lily’s Cafe, or Lily Sandwich, We Aren’t Sure)

The first thing you’ll notice about Lily’s Sandwich is that a steady stream of locals come through for the french baguettes–Lily’s bakes their own and serves them up as sides to Bo Kho and soups, or for delicious sandwiches. Lily’s excels in other areas as well, serving up tasty soups and dozens of traditional dishes…but back to the best soup in Austin. 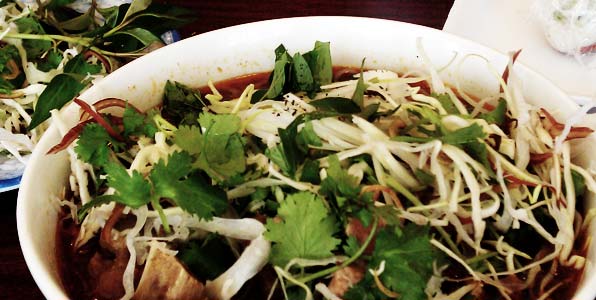 Bun Bo Hue is a traditional dish from the ancient capital of Vietnam. It’s beef-based, with strong citrus and spice flavors. If ever-popular Pho is red wine (Lily’s Pho is also excellent, by the way), Bun Bo Hue is aged scotch. It’s complex, initially inaccessible, and can be downright scary at first. Curiously, I didn’t enjoy it my first time. Nevertheless, about a year later something called me back. Once adjusted to Bun Bo Hue’s complexity and “foreign-ness”, I can only describe it as otherworldly. To be sure, there is a lot going on here: at least a dozen spices (star anise, cloves, cinnamon, more), 6 different kinds of meat ranging from the recognizable to pig’s blood cubes.

Frightened yet? Well, that’s one concession I must insist on, “no blood please,” and Lily’s complies.

If you are looking to expand your horizons, Bun Bo Hue might just be for you.